The long awaited Bicentennial of the War of 1812 happens to be occurring at the same time as the Sesquicentennial (150-year anniversary) of the Civil War -- and we all know how good a job Ken Burns did in making the Civil War popular -- hmmmm, a decade ago, I along with other members of the War of 1812 Consortium, Inc., tried to contact Mr. Burns to see if he might do a documentary series on the War of 1812 but were informed that he was booked up for years ahead with upcoming projects on baseball and jazz among other topics.

Of course, the Centennial of the 1914 start of World War I in Europe is approaching, too, in August 2014, just when the 200-year anniversary of events here in Maryland and Washington, D.C., should be commemorated.  We might recall that a number of the memorials to the events of 1814 in this region were dedicated in 1914, including the gigantic bronze figure at Fort McHenry of Orpheus, the Greek god of poetry and music, erected to honor Francis Scott Key, the Georgetown lawyer, poet, and songwriter who wrote the lyrics of "The Star-Spangled Banner" in the Patapsco during the Bombardment of Fort McHenry. 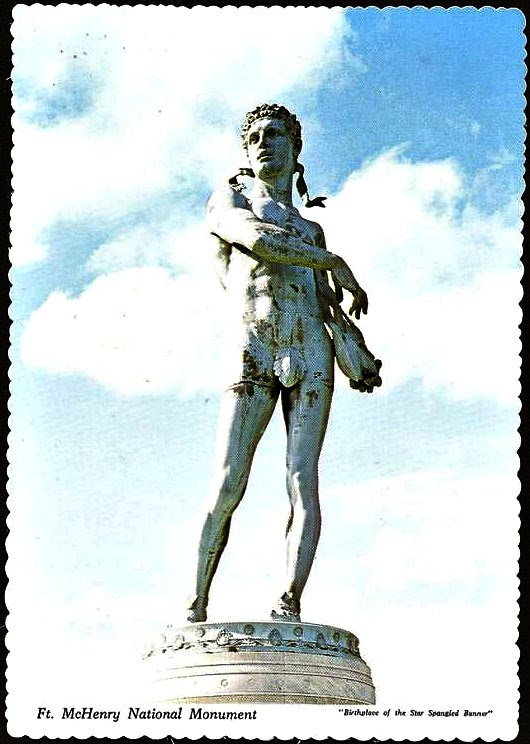 Memorial to Francis Scott Key at Fort McHenry.  Twentieth century postcard view. Collection of the Author.  In 1914, Congress appropriated funds for a monument at Fort McHenry to mark the centennial of Francis Scott Key's writing of “The Star-Spangled Banner” and the defense of Baltimore. The design for Orpheus with the Awkward Foot, by sculptor Charles H. Niehaus, was selected from 34 designs submitted in a national competition.  See the Monument City blog for more on War of 1812 monuments at Fort McHenry, http://monumentcity.net/category/fort-mchenry.

We should not begrudge these other conflicts their place in the sun, for men gave their lives during them just as men gave their lives in the War of 1812.  The Winter 2011 issue of The Civil War Monitor includes a graph of dead from America's wars based on calculations in article by J. David Hacker published in Civil War History, December 2011.  The War of 1812 shows a rate of 24 killed per 10,000 population compared to 116 killed in the Revolutionary War, 6 in the Mexican War, 208 in the Civil War, and 11 in the World War I and 30 in the World War II.  So although the War of 1812 might seem to have been a small conflict compared to the bloody First and Second World Wars, when we think of those who lost their lives in the War of 1812 compared to the population of the young United States, those losses had a real and tangible impact on the life of the new country.

Last evening, my wife Donna and I had the pleasure of attending the St. Andrew's Society of Baltimore's Robert Burns Nicht Dinner at the Scottish Rites Temple located a block away from us here in Baltimore on North Charles Street.  One of the chaplains of the Society, Rev. Ernest Smart, recited a poem by Burns which the poet, perhaps better known for his wit and his love poems such as "My Love Is Like a Red Red Rose", wrote about celebrations of national victories, reminding us that men died on both sides and that death is no reason to celebrate.  These words are worth remembering:

Thanksgiving For A National Victory

Ye hypocrites! are these your pranks?
To murder men and give God thanks!
Desist, for shame! -- proceed no further;
God won't accept your thanks for Murther!

War Memorial on the Cheap!

There's an effort underway in Congress to nationalize the small District of Columbia memorial to the Great War on the National Mall, which is dedicated to D.C. residents who fought and died in World War I. The initiative is being resisted by the D.C. government, quite rightly, because it would go against what the memorial was meant to commemorate, those who fought and lost their lives who lived in the District.  I had a letter in the Washington Post of January 26 to the effect that if Congress really wants to commemorate all who fought in the war, they ought to fund a war memorial worthy of the event to rival those already on the Mall to those who fought and died in World War II, the Korean War, and Vietnam. Read my letter here and the original front page piece in the Post with a nice photograph of the lovely small D.C. Great War Memorial here. Also see the Wiki page on the memorial.
Posted by Christopher T. George at 1:00 PM