British Use of "Tenders" in the Chesapeake Bay 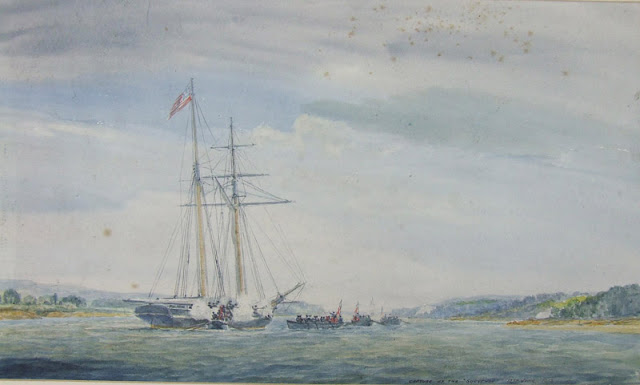 "The capture of the U.S. Revenue Cutter Surveyor by forces of the Royal Navy, 1813," a watercolor by Irwin John Bevan. Courtesy of the Mariners' Museum.


I had a query passed on to me this morning from the Havre de Grace Maritime Museum about the British use of what they termed "tenders" in the Chesapeake Bay.  Because the Royal Navy was a massive entity at this period, with over 600 major vessels, a number of them of 74 guns or more, and the U.S. Navy was comparatively small, only 20-30 vessels, the largest being the 44-gun U.S.S. Constitution -- David versus Goliath -- what was a sizeable vessel for the Americans, i.e., a 36-gun frigate or a schooner, was small to the British. To the British, a frigate of of 32 or 36 guns was only a fifth-rate man of war, e.g., the British frigate HMS Macedonian, 38 guns (1810), captured by USS United States under Marylander Commodore Stephen Decatur on October 25, 1812.  A "tender" was usually what Americans knew size-wise as a schooner in terms of the British operations in the Chesapeake during the war.


The basic problem that the British had in operating in the Chesapeake Bay was that various parts of the Bay, specifically close to shore and in rivers, are relatively shallow.  That is why they used shallow draft vessels to transport attack forces from their heavier vessels, i.e., 74 gun ships of the line, frigates (usually 38 guns for the British), brigs, etc.  These shallow draft vessels were often captured American schooners or, when closest to shore, row barges which would be used for the actual attack on the American towns and installations.  At Havre de Grace, the Susquehanna Shoals toward the town, off Specutie Island, kept the British larger vessels some distance away from the town and the barges were used to row over the shoals for the attack of May 3, 1813.


Highflyer was one of the captured American schooners (tenders) that was used by the British at Havre de Grace and it was later recaptured by the town's favorite son Commodore John Rodgers in a neat bit of history that the Havre de Grace Maritime Museum might wish to discuss if it does not already have plans to do so.  Commodore Rodgers of course later played a key role on the Potomac, trying to attack Gordon's squadron with fire ships and then in the defense of Baltimore commanding "Rodgers Bastion" in present-day Patterson Park.

I have the Honor to inform you that whilst anchoring the Brigs and Tenders of Spesucie Island agreeable to my Intentions notified to you in my official Report of the 29th Ult. No. 10 I observed Guns fired and American Colours hoisted at a Battery laterly erected at Havre-de-Grace at the entrance of the Susquehanna River, this of course immediately gave to the Place an Importance which I had not before attached to it, and I therefore determined on attacking it after the completion of our Operations at the Island, consequently having sounded in the direction towards it and found that the Shallowness of the Water would only adnit of its being approached by Boats, I directed their assembling under Lieutentant Westphal (1st of the Marlborough), last night at 12 O'Clock alongside the Fantome, ...


My understanding, at least from reading one ship's log is that the tenders were likely ones taken from prizes or anything local that was stopped in the Bay, and that happened frequently. The British had their own very good charts of the Bay, but still often were caught on mud or sand flats and then one or more of the other ships would be sent to help get them off the shoal or bar. There are letters from Cockburn to Warren addressing his efforts to chart the shoals of the Patapsco, and he had to anchor his ships well off Havre de Grace and send in launches because his ships could not get over the shoals.

My suggestion regarding charting the shoals and sand bars of the Bay and finding the earliest done, look at the charts in the National Archives for the Army Corps of Engineers, they do have all available old charts for the Bay.

I have not seen anything yet to indicate that it was boat building that drew Cockburn to Havre de Grace. If anything it was more about provisioning and water.

From my friend and colleague Scott S. Sheads, War of 1812 historian and ranger at Fort McHenry National Monument and Historic Shrine:

I would like to introduce you to my Maryland In the War of 1812 blog.  After 25 years of research I am beginning to clear away my heavy laden shelves that seem to have no end. The articles are extracted from a larger work in progress. I hope you will enjoy them as much as I have in preparing them. There is more to follow..!

PS: If you have any subject you would like me to publish on my blog, please feel free to contact me.

Lower Shore looks at its role in War of 1812

Scott Sheads was the featured speaker at a luncheon held by the Lower Eastern Shore Heritage Council, on January 18, at the University of Maryland Eastern Shore's Henson Center.

"This special program is a kick-off for the commemoration of the War of 1812 on the Eastern Shore," said council member Bill Wilson. "Since the Chesapeake Bay was a primary battleground for the war, this program is a way for area residents to inform themselves of the history and how it affected us."

The 1812 commemoration has prompted area historians to discuss the involvement of Somerset, Worcester and Wicomico counties during the war. However, no single source of information about this exists.

"Historical footnotes can be found in a variety of sources, but what's needed is a collective source about the War of 1812 on the Shore," said Aaron Horner, research assistant at Salisbury University's Nabb Research Center. "It really is like pulling teeth to find enough information even to present to a high school class. We have nothing special in the way of diaries, letters or journals pertaining to the war in our area, but we know there was a lot of (War of 1812) activity here."

Actually, Mr. Horner, doesn't Mary Margaret Revell Goodwin's Eastern Shore 1812 Consortium website http://www.easternshore1812.org/ meet this need?  I suggest you cooperate with her if you are not already doing so!