The British Route from Washington to Baltimore in 1814 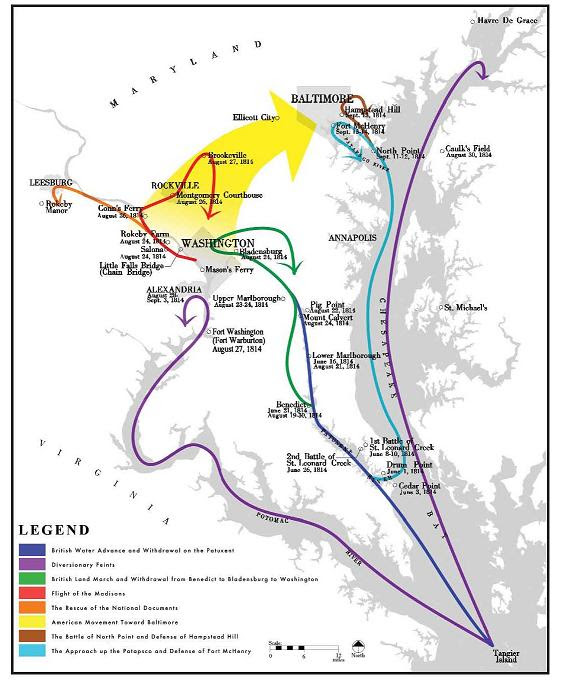 American and British Routes August to September 1814.  The broad yellow arrow shows American troop movements from Washington to the defense of Baltimore: General Ross's British Army returned to their troopships on the Patuxent for the trip up to the city on the Patapsco for a combined land-sea attack (turquoise and brown arrows).


I had a telephone query a few days ago from a reader of my book Terror on the Chesapeake: The War of 1812 on the Bay.  He wondered why, after capturing Washington, D.C., the British did not march directly to Baltimore to attack the city but instead went back to their ships in the Patuxent.  And it's true that there was a good road from Washington to Baltimore, what we know today as old Route 1, through present-day Hyattsville, Laurel, and Elkridge.  The British would have had the advantage of attempting the city from the west or southwest where the Americans themselves knew the city to be most vulnerable -- virtually defenseless.  For most of the city's defenses were located in the harbor, at Fort McHenry and associated harbor batteries, and on the eastern side of the city, anchored in present-day Patterson Park or Rodger's Bastion, where the later nineteenth century Pagoda is today, in expectation of an anticipated landing at North Point and an attack on the city from the east, which is what the British attempted.

There are a number of answers to this question.

First, the British land commander, Major General Robert Ross, was supposed to stay near the shipping and had not received clear instructions to attack Washington, D.C. in the first place, although he was persuaded to do it by Rear Admiral George Cockburn, who was accompanying Ross on land, and some of his own British Army officers, most notably his deputy quarter master general, Lieutenant George de Lacy Evans.  Ross and the army had to return to the ships to maintain their supply line and could not simply march on Baltimore after Washington -- although it is true that one History Channel documentary in which I appeared circa 2000 showed in an erroneous map that they did exactly that!

Second, the attack on Baltimore had to be a combined land and sea coordinated attack.  In order for this to occur, British commander-in-chief Vice Admiral Sir Alexander Inglis Cochrane needed Ross's troops back on board their troopships and to receive back the bombardment squadron that had been sent up the Potomac as a diversionary movement under Captain James Alexander Gordon (lower purple route in the map above).  Gordon's squadron, which was also intended to aid Ross's army if need be, forced the capitulation of Alexandria.  Cochrane had to wait for Gordon's squadron to return before the invaders ascended the Chesapeake for the assault on Baltimore.  Gordon would rendezvous with the main fleet near Tangier Island, Virginia, in the southern Bay in the first week of September. Thus, serendipitously for the defenders at Baltimore, the British attack came via North Point exactly as Baltimore commander Major General Samuel Smith had anticipated. 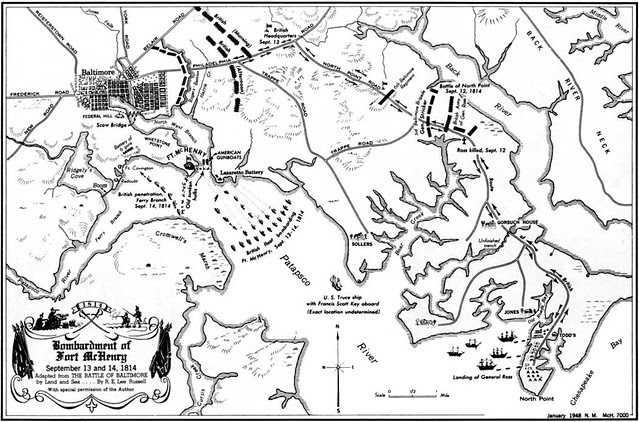 What would impact the British plans to take Baltimore was that they underestimated the American determination to stop their capture of the city, the idea impressed on Ross by Cockburn that the American militia "would not stand" -- of course he had vast experience dispersing small pockets of militia around the Bay for the last 18 months -- and British casualties received at Bladensburg which affected the performance of their army of 4,000 when they arrived at Baltimore.  The city was defended by nearly 20,000 troops, and by entrenchments bristling with cannons.  The British had limited artillery and no cavalry to scout what was happening up ahead.  They had lost important officers of the 85th Regiment that had led the advance in operations leading to Bladensburg, notably the commanding officer of the 85th, Colonel William Thornton, who would though recover to lead his regiment at New Orleans.  The loss of Thornton and other officers and other British logistical problems would set up the loss of Ross in a skirmish leading to the Battle of North Point and lead to their inglorious withdrawal from Baltimore when the Royal Navy proved unable to get past Fort McHenry.

Incidentally, despite the received wisdom, the damage the British received at Bladensburg was not just from Commodore Joshua Barney's battery. The American militia, although woefully led by Brigadier General William H. Winder, U.S. Army, did not merely "run" as the 1816 satirical poem, "The Bladensburg Races" would imply.  True, according to Mary Barney's book, Ross is reported to have said to Admiral Cockburn tn regard to Barney's battery, "They have given us the only fighting we have had." However, forcing their way over the bridge over the Anacostia River, the British suffered from the artillery under Colonel Decius Wadsworth, U.S. Army, and Captain Benjamin Burch and from militia musket and rifle fire.  Overall, the losses at Bladensburg along with the men lost in an accidental explosion at an American arsenal at Greenleaf Point and in the march to and from the ships would materially affect what happened to Ross and his troops at Baltimore. 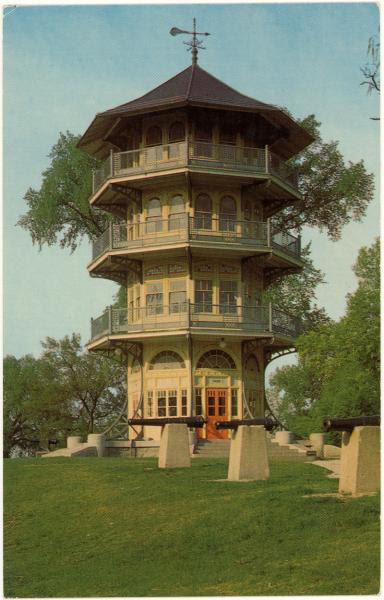 Memorial cannons at the Patterson Park Pagoda, Baltimore (1890), point in the direction that the British Army would come in attempting to attack the city, September 12-14, 1814 -- from the East.  A Twentieth Century postcard view.  Collection of Christopher T. George.  See also http://pattersonpark.com/places-in-the-park/pagoda/
Posted by Christopher T. George at 7:31 AM