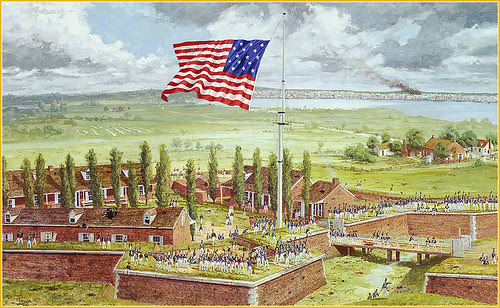 "The Flag Was Full of Stars" by Dale Gallon.  Courtesy of the Patriots of Fort McHenry.

Philip Marshall, producer with Maryland Public Television (MPT) is developing with American Photoplay a docudrama on Francis Scott Key due to air in September 2014.  There will be a one-hour drama along and a second hour with "talking heads" speaking about Key and the writing of "The Star-Spangled Banner."  Chris George is one of the consultants on the project.

MPT has formed a business relationship with American Photoplay to raise funds for the film project, which is expected to have a Hollywood-caliber cast and local talent including historical re-enactors.

FSK is to be made in the style of the seven-hour HBO series "John Adams" that screened in 2008.  The film is expected to be shot in Baltimore, Annapolis and in the MPT studios.

It promises to be a most exciting project, though as yet in its early stages.  There is a Facebook page for FSK.  Go to http://www.facebook.com/FSKMPT

Documentary on "The Star-Spangled Banner"

We need your help getting the word out on our Kickstarter campaign for a documentary film about the story behind our national anthem.

The video provides an overview of what the film is about; more videos and information are on the Anthem web site. Please help support this film about one of the most important aspects of our national identity. And please tell your friends!  Thanks

Christine Arato has been selected as the program coordinator for the National Park Service (NPS) bicentennial commemoration of the War of 1812. Arato will lead a multi-disciplinary national team in planning for all aspects of the commemoration, which will be held from June 2012 through June 2015. The NPS will coordinate its efforts with those of Parks Canada and the U.S. Navy.

“The War of 1812 remains in the American memory with the writing of ‘The Star Spangled Banner,’ the burning of the White House and the Battle of New Orleans,” said Director Jon Jarvis in announcing the selection. “But the effect of the war was felt throughout the young nation as we struggled to win a war and establish our national identity. The National Park Service looks forward to working with many partners as we commemorate this critical time in our nation’s history.”

Arato is currently the senior historian and National Historic Landmarks program manager for Southeast Region. She will start her new position in March, working at the Northeast Regional Office in Philadelphia. Top projects for the commemoration include a new brochure, website and commemorative events at parks throughout the system.

Arato graduated with honors from Harvard University with a bachelor of arts in European history and a master of theological studies. As a Student Conservation Association intern, Arato served at Theodore Roosevelt National Park and with the Olmsted Center of Landscape Preservation. After Peace Corps service in Morocco, Arato joined the NPS, contributing to planning efforts for New Bedford Whaling National Historical Park and the Boston Harbor Islands National Recreation Area.

In 2001, Arato accepted her first permanent appointment at John Fitzgerald Kennedy National Historic Site, where she was the supervisory park ranger. Arato has held acting assignments in the Office of Legislative and Congressional Affairs and as the superintendent of Horseshoe Bend National Military Park, as well as a consultant to the World Bank. She is currently at work on a book about Rose Kennedy and the imagery of motherhood in the twentieth century commemorative landscape.
Posted by Christopher T. George at 11:47 AM