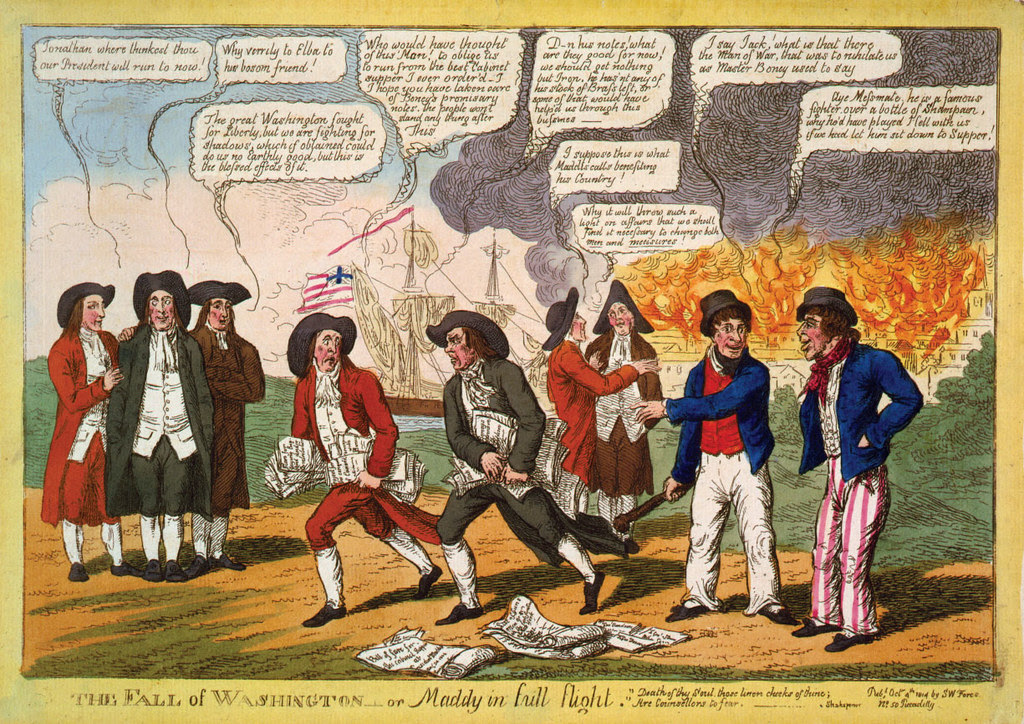 "The Fall of Washington or Maddy in Full Flight" -- period cartoon published by S. W. Fores in Piccadilly, London, October 4, 1814, lampooning the events of August 24-25, 1814, when the British Army under Major General Robert Ross dispersed an American army of mostly militia at Bladensburg, marched into our nation's capital and burned the public buildings -- arguably the lowest point of American history before the Lincoln assassination and 9/11.

"The Country had been filled with anguish, astonishment and dismay, at the successful attack upon our Capital; we forgot for a moment that it was but a straggling Village, defended by an inadequate force - by militia hastily drawn together a few hours before, fatigued and worn down by extraordinary exertions, and we felt, as if a vital blow had been struck at our national existence. It was discovered that our foes had thrown aside the restraint of civilization and were resolved on the most cruel and barbarious warfare. This was unequivocally displayed in the wanton destruction of private property and in the mutilation of the most splendid monuments of the arts which this new world might boast. . . ." Report of the Special Committee of the 1816 Baltimore City Council for Commemoration of the Repulse of British Forces, September 13th and 14th, 1814

As we enter the Bicentennial period of the War of 1812, which will extend through this year of 2012 into 2015, I am beginning this blog to help discuss the War of 1812 which I have been involved in researching now for over twenty years, mainly in regard to the war in the Chesapeake but also as the founding editor of the Journal of the War of 1812 and co-ordinator of the National War of 1812 Symposia held each fall, usually in Baltimore, in which we have always tried to cover the full range of aspects of the War of 1812.

On this blog, I will express my views about the war and answer questions from readers.  Feel free to comment.

There are a lot of exciting things happening.  The Journal of the War of 1812 , previously a quarterly print journal, is now become an on-line journal and will cover the Bicentennial with two full issues due out this year in pdf form.  A letter is going out to the subscribers to explain that.  Also I will be putting together an expanded 16th National War of 1812 Symposia in Baltimore this fall.  Look for news of that here and also news of other events taking place, including talks and conferences taking place in this country, Canada, Ireland, and Great Britain, and elsewhere.  This is an exciting time!
Posted by Christopher T. George at 10:44 AM