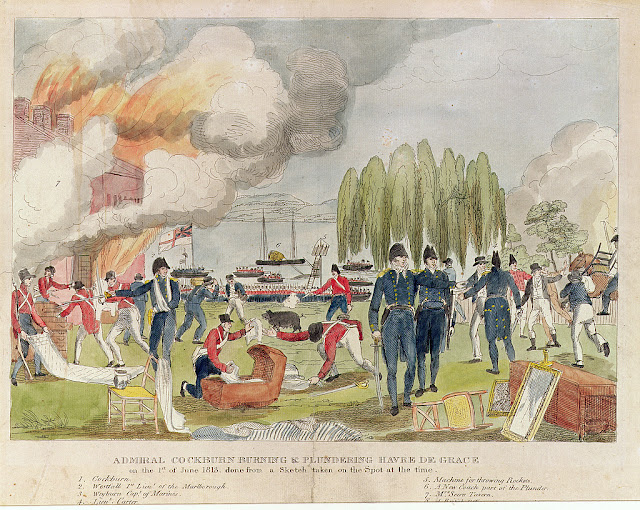 
I am getting ready to talk tonight in Bel Air, Maryland about the British burning of Havre de Grace.  See below.  I have been engaged over the past year researching the British May 3, 1813 attack on the town, which became an American poster child for British misbehavior and outrages after the British burned two thirds of the town of sixty houses and British troops even broke the windows an damaged pews at St. John's Episcopal Church.  Of course, our Canadian friends will argue that these "atrocities" are no worse than out of control American troops did in Canada.  And they would be right.  Nonetheless the British actions at Havre de Grace gave ample grist to the American propaganda machine as at least in the forum of public opinion the supporters of President James Madison could prove to Federalists or neutrals that the British were a disgrace to the human race.

St. John's Episcopal Church as illustrated in Benson J. Lossing's The Pictorial Field-Book of the War of 1812 (New York: Harper's, 1868).


As part of the Havre de Grace marking of the Bicentennial of the war and the city's role in it, a model is being built in the new visitor's center. See a blog posting by my fellow historian, Mike Dixon at http://hdg1812.wordpress.com/. I saw the model for the first time last weekend. Unfortunately, as now planned, the model, being built under the direction of Mitch Mitchell, will not show the British attack or the British burning the town. The idea, after earlier an earlier decision to not show the British in the town, is to show the town on the day before the battle. I think this is a mistake. The diorama at Bladensburg showing the British coming across the Anacostia (then the Eastern Branch of the Potomac) comes to mind as an example of how splendid it would be to see those scarlet-clad Royal Marines and the lads in blue, Cockburn's tars, in the town.

After viewing the model, I was prompted to write the following email to HdG 1812 Project Director Heidi Glatfelter and others on the project.  I follow it with her reply:

Thanks for the meeting yesterday. I appreciated the opportunity to view the model for the first time. I wanted to express a concern that I voiced when I was with you. I really think that the model will be disappointing if it does not show Havre de Grace at its most significant moment in American history.

Showing the town as it looked before the attack is rather dull and lifeless. I think you could do a lot better if you show the attack in progress and include the destruction of some of the buildings.

What you have now is interesting but it won't excite the public.

Heidi said that the problem is that you don't have full data on houses that were burned. That's true but you will never have complete data, so do the best with what you have. The model is always going to be in large part conjectural and won't show the town as it was exactly. You do know of some of the buildings that were burned. Show them in flames, and add the excitement to the diorama that is presently lacking.

Christopher T. George
Author, Terror on the Chesapeake: The War of 1812 on the Bay

Thank you for your thoughts on showing the attack on the model. I understand your reasons for wanting to make the model more dynamic, but at this point in the process, I don't think we should derail the model builders. They had a great deal of discussion prior to beginning the model about what time period (pre/during/post attack) to represent, and for a number of reasons, they decided to go with the day before the attack.

I have been thinking about how we could show the attack on the model, and don't really think we could do it justice anyway. As you saw, the people are so small that it would be difficult to distinguish red coats from townspeople, and and I don't think the effect would be that startling. However, I do think we need to represent the attack well on the exhibit panels, as we discussed. Perhaps we can blow up a photo of the model of the town and have an artist draw in the attack, which would help represent it with  more impact. I'm open to other ideas - I know films and interactive displays were also discussed. They aren't covered in the grant, but perhaps a local corporation or donor would be interested in making a contribution. Our exhibit firm can also help us figure out how to represent the impact of the attack, which is the primary story, of course. 
Also see a new entry on my other blog about the facts and myths of history.  Go to http://christophertgeorge.blogspot.com/2012/02/just-facts-maam.html

Posted by Christopher T. George at 5:39 AM